While researching book clubs for a panel I’ll be moderating, I came across lists of club questions members use to facilitate meaningful discussions about the books they select. If Scooter Nation was a choice, it would be pitted against queries such as:

Is the book plot or character driven?

Are the characters relatable?

Can the story be set elsewhere?

and—here’s the trick question—What genre is it?

Scooter Nation is a darkly bent romp centered around a cadre of eccentric funeral directors struggling under great threat. What does that mean? Is it a comedy? Thriller? Mystery? and if so, is it a cozy?

Since releasing Scooter, I’ve had the privilege of receiving first-hand accounts from readers detailing what the book is about, what it essentially means, and what genre it conveniently fits into. Some found it “hilarious” while others found it “chilling.” Characters were deemed “not always sympathetic” or “morally elastic” and with goals ranging from “altruistic” to “self-serving.” Others saw it as “irreverent,” “heartbreaking,” “ground-breaking” and “well-worthy of a second read.”

All instructive, but not helpful when trying to boil the book down to one thing: genre.

The story begins with a vengeful harridan plotting and scheming from her second-floor office in the funeral home where she works. As the illegitimate and unacknowledged daughter of the larger than life patriarch who is long dead and has inconveniently left behind two singly unworthy sons to inherit the lot, she has much to chew over. Add to the mix, a collection of decades-long funeral directors dedicated to the establishment as only long-serving employees can be, and the reader winds up in the middle of a perfect storm of death, regret, self-entitlement, and fear of the unknown.

On one level, Scooter Nation is a love story with the weather-beaten funeral home as a forlorn and threadbare heroine-protagonist. Standing her ground on a street that has outgrown her, she is threatened by the shiny new high rises that grow up around her and the people who embrace ferociously the change that modernity is sure to bring. With her faded awnings and peeling paint, the building is a symbol of death, decay and esoteric practice that happier times have left behind. But inside, she is history; a living, breathing record of people past and present. Mistakes, triumphs and above all, tradition, live here, supported by the curators who have seen much, suppress more, and struggle to keep alive the one thing that gives meaning to their lives: history.

In that sense, Scooter Nation is a journey story, with its funeral director hobbits laboring their way from the basement to the summit of Mount Doom—the top floor, and the woman who presumes to take by force what is hers and then rule from lofty heights. As villain, the heir presumptive will remodel, reface, redo, and do all but tear their beloved funeral home down.

Enter then, the elements of revenge and murder. How far will the staff go to protect their livelihoods and the community that has grown from them? The funeral home, more than just a ladylove of a building, is also an anchor that holds in place like-minded people. Rightly or wrongly, they will do just about anything to stop the scourge that threatens them, even if it means aligning with persons more dubious than the woman who tries to control and change them.

Innocence and the loss of it over many decades also figure prominently, and while the historical references do not make Scooter a work of historical fiction, it lays the groundwork for the next novel that actually is. Poor Undertaker, Scooter’s follow-up, takes the reader back to 1947, where the grand old building is at her zenith, the profession she houses is held reverently, and the staff operating behind closed doors burst with pride under their pristine English-style morning suits.

As a comedy, Scooter Nation longs for the good old days every bit as much as it pooh-poohs faux window treatments and LED lighting. Yet there is poignancy too. People die in Scooter Nation not because they invited it, but because they must so that the story can move forward. There is no mystery here, only sadness followed by revelations leading to a blissed-out ending.

Scooter Nation relies heavily on its characters to deliver the emotional wallops needed to elicit varying responses from those who pick up the book. Whether readers are looking for laughs or knowledge about what morticians do behind locked doors, they will find in this read something removed from pure genre. 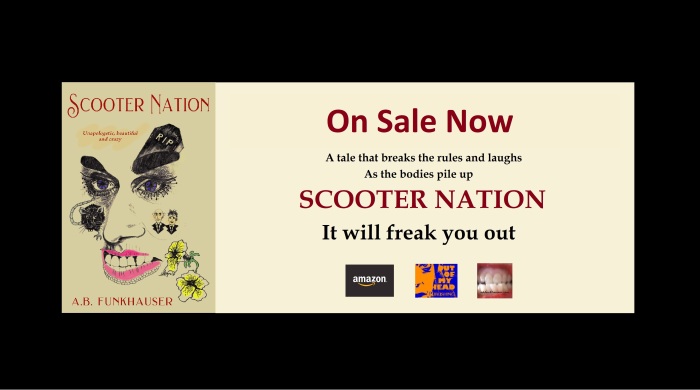 Toronto born author A.B. Funkhauser is a blended genre novelist who has won both humor and horror prizes for the same work. Her next novel Poor Undertaker examines the life and times of staff at Weibigand Brothers Funeral Home CE 1947. 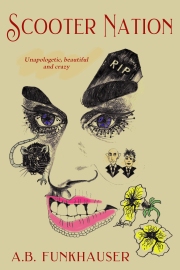 Scooter and Carla have to deal with lots of drama and backstabbing behind the scenes. They face off with Jocasta Binns. On the other hand, there is also a scooter bound gang led by a silver haired goon wreaking havoc on the gardens in the most contemptuous way. The Funeral Service is saddled with tension between the “siblings”.

The author has weaved quite the hilarious tale set in a funeral service establishment. The story highlights the inner workings of managing such an establishment which, it turns out, is like any other family business. The story is so vividly narrated that the reader cannot help but join the world.

The plot is well developed and fast paced and the characters are multi-dimensional. This makes it easy for the reader to visualize them and get acquainted. It is particularly interesting how Jocasta is introduced to the reader. She is introduced with her crackling fingers and her scandalous origin. She is not fazed by her old age and remains stoic and a force to be reckoned with. The Jocastrator can withstand anything and anyone. She inspires the kind of admiration that is mixed with fear. Then there is Scooter, who seems very sweet and charming. He is like the sunshine that peeks through the curtains in the morning. Then Charlie, the poor old man who has been turned into a mere informant for the brothers. Every character has a backstory and their uniqueness shines through regardless of their role in the story. This is one of the biggest strengths of this book.

Scooter Nation contains all the elements of a great novel. Thoughts and ideas flow seamlessly while moments of laugh out loud humor keep you engaged in a story that is surprising at every page turn.

This is a book I can see myself reading again because the characters, incontinent though some may be, make you want too keep coming back. It has managed to surpass expectations which were already high from the first installment in the series. A perfect book for a good chuckle. 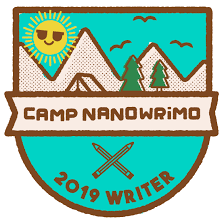