I feel like I’ve travelled this path before, and no wonder: Rachael Stapleton and I not only belong to the same writer’s group–the inestimable Brooklin 7–but we also share the same publisher, Summer Solstice out of Farmington, Missouri.

It’s been great getting to know her over the years as her characters developed and grew. What’s really exciting is seeing them emerge both in electronic and print formats. And there’s also the real benefit of knowing what’s going to happen next in Vol. III!  For the moment, let’s focus on Rachael and Vol. II.

Rachel Stapleton spent her youth cultivating a vivid imagination inside the book lined walls of an old Victorian library where she consumed everything from mystery to biography. Creating magical worlds that included hidden elevators, secret spiral staircases and truly heinous villians, it was only a matter of time before her talents took flight. At sixteen, she penned a column for the local newspaper and in 2006, wrote her first book featuring an adventurous librarian. Today, Rachael lives in a Second Empire Victorian home with her husband and two children in Ontario, Canada, where she enjoys writing in the comforts of aged wood and arched dormers.

Hello. You’re making yourself at home.

There’s a lot of snow out there.

Tell me about it. Oh! Wait a minute! You did, when I told you I was moving to the country. (laughs)

I was jealous. I love your house. 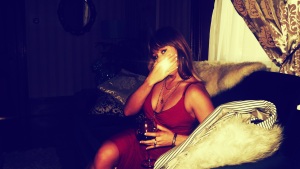 Thank you! We searched for it for over a year. It’s just the right mix of family home and author inspiration. I’ve been making some good headway.

So we can expect more adventures from Sophia Marcil?

You know it already. You’ll be hearing more about that when the B7 meets. Bwahaha.

You know I love Sophia, but who is your favourite character to write?

I do love Sophia, but Leslie is the most fun to write. I always think of that saying. “Though she be but little, she is fierce!”― William Shakespeare, A Midsummer Night’s Dream. Leslie is spunky and funny and just a helluva fun character to write but she is also intelligent, loyal and she would do anything to protect Sophia. I’ve been working on a dream cast today. I’ll give you a sneak peak. (See attached) Editor’s Note: It’s with red face that I confess to not attaching the attachment….I will get on this in a new post. Mea culpa, Rachael.

And she doesn’t get into the big trouble Sophia always does. She’s the sensible one.

Sort of, yes. But Leslie wanders out of bounds too. She’s quirky and wild, I think she just hasn’t been tested the same way Sophia has. You’ll get to know her even better in the next two books. (grins)

You’re always writing. What is your favourite part of the process?

No doubt about it—taking the rough draft full of budding possibility…shaping it into a fully realized story. Add depth, mix with flair, and situations that crackle with energy…

Exactly! Get the crackle, so much so that it feels real. Plus it’s in those moments that I get to spend time with amazing people like you, reviewing and editing. I can’t count the number of times that discussing a chapter with our writers’ group has shook an amazing scene loose.

I feel the same way. And thank you for the mention. Now for some quirky questions.

What punctuation mark best describes your personality and why?

The Question Mark! I have a lot of questions—most likely because I’m always researching for my novels. People have told me that as a child I was inquisitive and curious. Oh. and some may have called me ‘nosy’ but I think I just really enjoy learning. Google is my best-friend. Whoo! That’s two questions answered in one. Boom! I’m on a roll.

In the past, you’ve mentioned your childhood often and fondly. What do you miss most about it?

Everything! I had an awesome childhood! Playing British Bulldog, which is a game of tag, at the public swimming pool, followed by Saturday night parties with my cousins. Consuming mass amounts of junk food along with movies like E.T., Teenage Mutant Ninja Turtles and Dirty Dancing.  I know we were wild, right? Playing Super Mario Bros. with my sister was also pretty fun and who could forget the way summer just stretched on and on.

If you could be invisible for a day, what would you do?

How invisible am I? Can I touch things?  I mean, if I were to rob a bank? (Shakes her head) The morally correct side suggests doing nice things for unsuspecting people. With that being said, I would most likely succumb to the obvious malevolent tricks: stalking powerful people for blackmailing purposes, tripping bullies, and last but not least, I would follow my husband around to see what he really does all day! Muhahaha! Pure evil, I know.

Laundry. That’s why I need a separate dressing room to house all of my clothes.

Have you written any other books that we should read next?

I just finished a short story that will be published in the Solstice Valentine’s Day Anthology. It’s called DINNER IN THE DARK and it’s a delicious prequel to how Sophia and Cullen really met with a recipe for Dill Pickle Soup. You can also find THE TEMPLE OF INDRA’S JEWEL on Amazon. It’s the first book in the Temple of Indra series. I have three other projects in the works.

You’ve spent some time with me over the last few weeks discussing blog tours and how important they are to you. Where do you stop next?

The Blissful Blog of Susanne Matthews. www.mhsusannematthews.wordpress.com. Please feel free to stop by and you can see all of my other Blog Tour Stops on the media page of my website www.rachaelstapleton.com.  There will be a rafflecopter contest running from February 9th to 23rd for prizes. Hit the tour stops along the way to win.

Thanks, Rachael. You got anything in the fridge?

Of course! Nothing exciting though, I’m back on fitness show prep: egg whites, sweet potatoes, chicken and cabbage. I think I may have a jar of Nutella in the freezer…Mmm Nutella.

Find it on Amazon and at Solstice Publishing

Curse of the Purple Delhi Sapphire

As a librarian, Sophia Marcil loved reading, especially books about ancient curses and reincarnation, but she never imagined the legend of the Purple Delhi Sapphire was true until she inherited it and was transported back to a past life where she was murdered. Now she knows that not only is reincarnation real, but so is the devil’s magic locked inside the precious gem. Just as she’s about to tell her boyfriend Cullen about it, he proposes with an engagement ring made from a piece of the very sapphire that’s cursed her. Reeling from the shock and surrounded by his family, she allows him to place it on her ring finger. As soon as it touches her skin, she feels herself being wrenched back in time.

Before she knows it, she’s wandering the hallway of an old Victorian house in the body of her great aunt. Unfortunately, her nemesis has also reincarnated in 1920—as one of her family members. Sophia struggles to locate the Purple Delhi Sapphire in time to prevent the deaths of those she loves, but she fails and returns to her present-day life, to the precise moment she left, with a deep understanding that her killer’s soul is also tied to the sapphire and every life she has, he is resurrected as someone close to her.

Her stalker ex-boyfriend Nick seems like a prime candidate this time but she’s convinced she’s a step ahead of him, thanks to a tip from a medium, she knows that if she uses the magic of the stone correctly she can trap Nick’s soul in the sapphire and save herself. But when Nick is murdered, she finds evidence that has her questioning everything she thought she knew.

Is Cullen husband material or is history doomed to repeat itself?

10 E-Copies of The Temple of Indra’s Jewel. (The first book in the series.)

One thought on “Celebrating her new release Author Rachael Stapleton”