Just knowing author Gloria Weber has brought an added dose of whimsy to THIS writer’s life. Not only does she write spec fiction, but she’s also an out there advocate of all things SUPERHERO. She makes loving comics and reading manga COOL! Thank you for that, darlin’!

Gloria joins the blog today to unveil her latest UNMASKING LEMON’S THESIS.  Read on and enjoy! 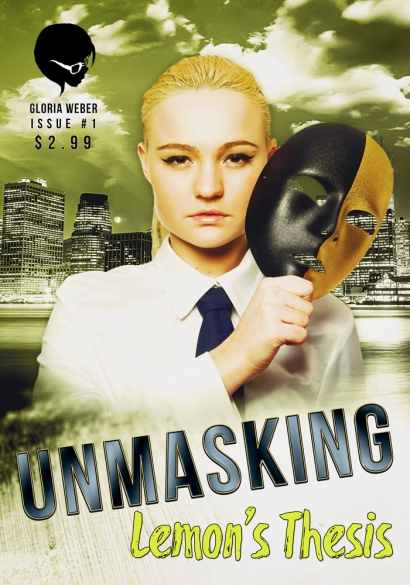 Welcome to Trowbridge City. It’s home to superheroes, maniacal villains, and everyday citizens. The stories here aren’t about good versus evil, but about hard choices, prejudices, and experiences complicated by superpowers.

Lemon “Em” Law is a super genius and she’s also the daughter of Trowbridge’s most infamous super villain, Yellow Fellow. After being fired, bullied by her professor, and dumped all in the same day there’s only one thing she can do! And that’s work on her thesis. Truth is, the last thing Em wants to be is evil. Unfortunately that thesis of hers is so revolutionary it could be dangerous. Is she ready to learn the secrets behind the masks?

“Now, take a guess. What has a national average of 52 percent, but in Trowbridge is an extremely high rate of 98 percent?” He asked while looking at Em.

He was baiting her. Still, she raised her hand.

“Yes, Miss Law,” he said her last name with as much sarcasm as he could muster. He always did.

Em was so over him and his childish antics that she didn’t bother rolling her eyes; she just answered. “That refers to the amount of children of super villains that turn to crime themselves.”

“Correct, as always.” He took a moment to sneer and give her a look of displeasure before continuing. “There are studies going on at the moment and the most promising of those attributes the cause to high concentration of villain groupies in Trowbridge. Of course, everyone here knows of Miss Nelly Law, right?”

The low blow made Em shut her eyes and take a deep breath in. Yeah, everyone knew about her mom. Her mom had earned her fame for two reasons. Number one was surviving being pushed off a roof by Yellow Fellow, Trowbridge’s most infamous super villain, and, number two, giving birth to Lemon, Yellow Fellow’s daughter.

Em opened her eyes in time to see Professor King point at someone behind her.

“Isn’t she in a wheelchair now? Wasn’t it a murder attempt?” The female student’s voice seemed uncomfortable and a little sympathetic.

“Correct your classmate, Miss Law.” He smiled now with joy and malice as he came to a stop before Lemon.

“My mother is indeed in a wheelchair,” Em said as her fingers curled around her pen, knuckles turning just as white as her ex-boss’s had been earlier today.

“Not that part,” he goaded.

Em took another deep breath while closing her eyes. She knew he would make her say the answer so it was better to get it over with.

“It wasn’t attempted murder. It was attempted abortion of me,” she said as loud as she could muster.

Gloria Weber lives in Ohio with her husband, son, daughter, and many pets. She has been writing for publication since March 2006. Over a dozen of her short stories have been published in ‘zines and anthologies. During the not-writing-times, she can be found doing not-fun-at-all-adult/mom/wife stuff, yoga, running very slowly (because that’s as fast as she can go), or cooking/baking. No matter what she is doing, she is a geek. There’s no turning that off.