It’s been years since I attended a large gathering of the faithful, and like any outsider I

walked through the doors of the Toronto Congress Centre with a wobbly uncertainty. I felt goddamned ashamed. After decades of self-improvement, I still felt like that kid on the playground, the one that doesn’t look right and probably never will.

Maybe it was my blue suede high-heeled cowboy boots that held me back. Somewhere in my feckless psyche, I had decided on my birthday that half-century feet sautéing in Uggs could be teased back.

I mopped my sloppy brow. Now measuring in at 5’11,” I remembered that I’d forgotten to take my hormone pill before I left the house. I dreaded the shvitz that would surely come.

A Doug Ford campaign staffer with fabulous accessories and terrific elocution skills approached with a tablet to steer me in the direction of Registration. There, my name, email address, postal code and degree of commitment was recorded digitally.

Fantastic! With what would amount to a crowd of anywhere between 1500 to 2000 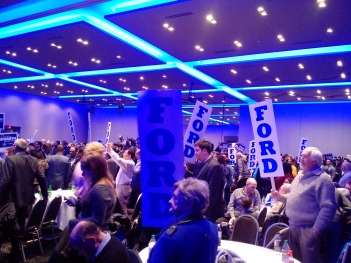 depending on who you asked, this campaign would lead off strong with busy hands in every sphere.

I remember when we did this on paper and by rotary dial telephone alone!

To say that Doug Ford’s candidacy for Premier of Ontario is well-organized is not to gloss it. I saw it with my own eyes. From the jammed media riser to the wet bars in every corner, everything and everyone was in its proper place waiting for the man of the hour. 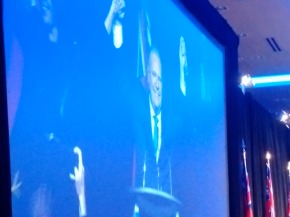 For American readers, let me tell you that Doug Ford is not new to the scene. He has had his fingers in politics and business for years, not unlike his predecessor, who was very ceremoniously dumped for social and possible financial wrong-doing just weeks ago.

That Doug’s team hit the ground, boots on, just days after his election as party leader speaks volumes to how badly they want it. But who was there to give it to them? 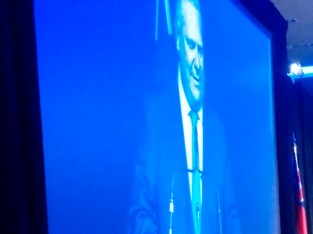 pale-faced. And he’s a dude. Who in their right mind outside of the faithful would vote for him? And wouldn’t the faithful look exactly like him?

Breaking a sweat under the bright lights, I retreated with aching feet to the shadows to get a better look.

Seems the Ford people don’t all look like him. In fact, I noted as many Benz and Audi in the parking lot as half-ton pick-ups. Nobody wore fur, and nobody carried truncheons. And nobody seemed to be overly concerned about my lack of Ford decoration, as if they knew that everyone there, press included, would behave, and would give the man of the hour a chance to speak.

The platform party was pleasingly representative of Ontario’s diversity—people with youth, people with age, people with history, people with enthusiasm.  More like them filled the hall. They are believers.

As the candidate mounted the platform, he was taken up in embrace by the three female candidates he defeated at the convention. Swearing solidarity, they are also promising to stick around, stick their necks out and actually run. I can’t fault anybody for having the courage to do that.

Mr. Ford spoke for about ten minutes and about the only thing I can remember is that “we are in a mess” and he will “clean up the mess.” If that’s what his communications director wanted to get across, congrats. It worked. 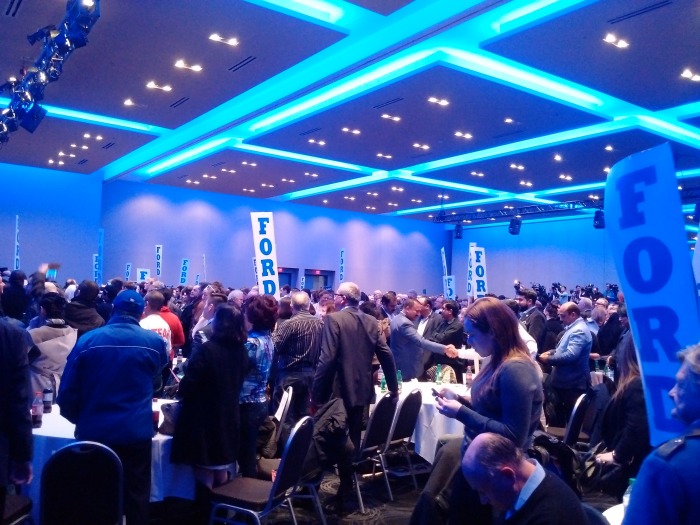 I’m on the floor now, my heels telling me that it is time. From this vantage, I can only see shoes—Dockers, Skechers, Vans, Steve Madden, Nine West—and some stroller wheels. What I don’t see are a rush of youthful feet, what we used to call (and what is probably still called) the Wedge, young Progressive Conservative Youth rushing the stage enthusiastically with lollipop signs. About the youngest I see here are late twenties but mostly early thirties, the new twenty. They cheer, they clap, but they are also composed and earnest.

I also do not see or, more correctly from the floor, “hear” the hecklers. Not even one. Do 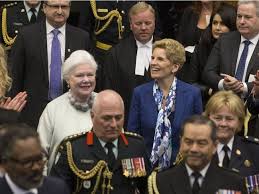 they only appear on-line or do they reserve their right to free speech for those in power? I guess I’ll find out when I visit the Preem, who’s currently busy answering questions about the Throne Speech.

The party is over, and Doug has left the stage. I’m still on the ground with my sore feet. I’m in a terrible mess. What shall I do?

I don’t have to wait long. A nice chap from Ford Nation offers a hand. He picks me up.

For The Daily Yammer, I am