It’s my great pleasure to welcome #GuessWrite winner for March 2017 Marina Black. Marina is a practicing registered nurse and multi-published romance author with a taste for bikers and happy endings. Now seeking representation, she is currently pitching her work on today’s #pitmad pitch party on Twitter. Join me in wishing her luck!

Welcome, Marina. Your work designation suggests medical thrillers, yet you write badass bikers. Tell us how you got there.

Thanks for having me! I often get this question and the answer is two-fold. When I’m not 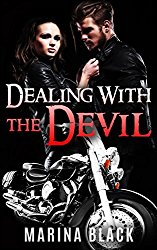 at work, I like to keep my thoughts separate from my occupation. On a daily basis I deal with the critically ill, distraught, and dying. Coming home, I write romance to escape and as a coping mechanism. It’s a really great way to unwind! The second reason I prefer not to focus my writing on medicine is: as a nurse, if you didn’t chart it, it didn’t happen. I find myself compelled to write in gritty detail of each and every assessment my patient—character—might encounter. I have a very lovely beta reader who reads everything and tells me when I’ve gone too far into detail. Trust me, it’s quite often!

Ed. – The temptation to share specialty knowledge is huge. I get where you’re coming from. 😀

So you write romantic thrillers?

I write contemporary romances. It just so happens that I also enjoy the suspense elements sprinkled in with my romance; it gives my novels some extra pizazz! My Badass Bikers series and upcoming novel Bargaining for Blood have a mystery, dramatic storyline that runs parallel to the romance. For Unintentionally Yours, there is no mystery or suspense involved—unless you’re wondering if they will or won’t live happily ever after!

I noted recently that a lot of modern ‘romances’ end badly. What, in your opinion, accounts for tragic endings? Is this a trend in romance writing?

Tragedy in romance is all well and good, however this is not something you’ll find in my

work. I see enough heartbreak, violence and bloodshed in my day-to-day life—I’m not looking for that when I’m reading or writing! Certainly ‘happily ever after’ eventually will come to an end for one reason or another, but you won’t find it in my work. I’m a big fan of the ‘happily ever after’.

Your current protagonist (from the new novel BARGAINING FOR BLOOD) Adeline is charged with rescuing the one she loves, yet she makes an interesting compact that reminds me of 1,001 Nights. Do you like to blend the ‘good’ and the ‘bad’ in your characters, or do you prefer to keep them behind their own lines?

I love to strike the balance between good and evil in all of my characters for sure. Each and every one of us has a ‘line’ and I like my characters to flirt with it on the regular! Adeline in particular learns a lot about herself in BARGAINING FOR BLOOD and, as the story progresses, begins to see that things are not always black and white.

What feeds a series? As the writer, do you find this exhausting, exhilarating or just plain psychotic? (last part said tongue-in-cheek! lol)

Characters are the drivers for me. In DEALING WITH THE DEVIL, I introduced four distinct

Motorcycle Clubs and a set of characters. After the book came out and people were reading I kept getting readers asking me about Cecelia and Danny and if their story was next. So, as an author I started thinking about them and that’s when SINNING WITH LOS SANTOS came into play.

What are you watching on T.V. right now?

I’m a huge DC junkie so the entire Flash, Arrow, and Legends of Tomorrow lineup is my jam. The 100 is absolutely fantastic—and my drug of choice. I’ve also been greatly enjoying Superstore—my guilty pleasure show!

Have I forgotten anything?

BARGAINING FOR BLOOD is coming soon! I’m also seeking representation, and that’s very exciting. Here’s an excerpt from CHAPTER ONE:

“Ms. McGinnis?” Malcolm Savage lurked in the shadows like a panther stalking his prey. Adeline straightened her spine, coppery hair spilling from its bun and framing her cherubic face. Her steely eyes were wet and her cheeks were flushed; she stormed past him like a vengeful angel and his palms itched with the need to touch her. “Adeline,” he growled, more sharply this time, and she stilled.

“Malcolm,” he corrected, narrowing inky black eyes at her. Their gazes caught and held, the electricity palpable in the air as he grasped her arm. “You and I are well enough acquainted by now, wouldn’t you say?”

Her body seemed to contract and she wrenched away from him like a caged animal, snarling and sneering. “Get away from me!”

If he was perturbed by her outburst, it didn’t show on his face. “I’m not here to hurt you, if that’s your fear. Frankly, I’m not even angry. Color me impressed.” She was wound tight enough to snap and he didn’t blame her. Adeline had always clung to her moral values; turning down the lucrative lifestyle he offered took guts. He may not have understood it on a fundamental level but he certainly respected the hell out of her gumption. For her to go and do something like this…it was out of character and out of desperation.

“We need to talk. We can do it quietly amongst ourselves…or we can do it at the police station. What would you prefer?”

Other Books by Marina Black

Losing Charlotte left a deep chasm within Bellamy Blake. It was the kind of hole that could only be filled by Clarke Griffin. This story chronicles the soul-binding love of two people who are destined to be lovers and leaders, despite the odds.

Lucy was born to ride. Three generations of Harding men have pledged their loyalties—and their lives—to the Devil’s Own Motorcycle Club. The club is her legacy, its blood runs in her veins, and she’ll be damned if she lets them exclude her. Lucy Harding will stop at nothing to take her place among the Devils and prove her worth once and for all.

Cecelia Santos was born for greater things. As a brilliant electrical engineer and a member of Los Santos Motorcycle Club, she’s always been regarded as a force to be reckoned with…but that doesn’t mean she’s had it easy in life. Cece has always been a fighter and now that she’s home after being kidnapped by a rival gang, she’s harder and tougher than ever. When a new threat rears its ugly head in her hometown of La Verdad, she vows to crush it all by herself. She doesn’t need help…especially not from the redheaded menace she’s trying to deny her feelings for.

Daniel Harding knows all too well how difficult Cecelia can be. He’s not only seen her as a warrior on the battlefield but as a woman warm in his bed. Although she’s made it clear he doesn’t stand a chance, he can’t back down. Los Santos are outclassed, outmanned, and outgunned; if they fall prey to Los Lobos, it won’t just be Cece’s family that’s in danger. For the good of everyone he loves, he has to make sacrifices…even if it means stepping on a few toes.

Tensions run high, blood runs hot, and the stakes get higher…will they be able to protect La Verdad or will they be damned for good?

The battle for control rages deep within the heart of New Orleans. While Hayley seeks to comprehend what it finally means to have a family, Niklaus must fight a thousand years of darkness to find a shred of humanity. The bond of blood runs deep…family, love, loyalty. All will be tested as two unlikely lovers come together. Will they find happiness or destroy one another?

When Mona Gallo finds herself accidentally pregnant, the life she worked so hard to build begins crumbling around her. Although she’s determined to raise the baby on her own, she finds herself inexplicably drawn to her sexy boss despite his rakish ways. Maybe it’s just hormones but Mona can’t seem to help herself when it comes to Reno. She should know better, of course. She’s been a stripper for half her life and seen first hand how letting down her guard only leads to heartache.

Vincent “Reno” O’Keefe’s life is falling apart. He lives three thousand miles away from his family, dates all the wrong women, is a terrible Catholic, and his fortieth birthday is around the corner. Now, his little sister has announced her engagement and he can’t bear to go to the wedding alone. Asking Mona seems like the perfect solution. She’s newly single, gorgeous, and in desperate need of a vacation.

Mona is eager to see Boston and enjoy one last trip before the baby comes. She can hide a pregnancy for a week, right?

Besides, what’s the worst that could happen…?

The treatise between the Grounders and the Sky People is a tenuous one. Danger lurks around every corner and war is imminent. Against all odds, Murphy befriends a young orphan and catches the eye of the Commander. For the good of their people, sacrifices must be made…the choice was almost too easy.

Harper’s life hangs in the balance as she rests in the depths of Mount Weather. Past, present, and future collide as Harper fights against the experiments the Mountain Men are doing on her. The only thing she’s sure of is that there’s only one sick, broken man who can save her…Harper has no choice but to put her faith in Cage Wallace.

The road to perdition is fraught with violence, anger and heartache. The way back to redemption is twice as bad. John Murphy lost his way in the world long ago. He vowed to numb the pain with bloody revenge. But she was the only one who wasn’t there to watch him hang for a crime he didn’t commit. Hurting her was never an option…

All Titles Available Through the Author’s Amazon Page

Marina Black was born in the state of Connecticut. She is a busy registered nurse who works at a bustling inner city hospital. By night (and the occasional weekend), she is a prolific writer who has penned many short stories and works of fiction over the years. Dealing with the Devil (August 2015) was her debut original novel and Book 1 of the Badass Bikers series. Unintentionally Yours (November 2015) is a fan favorite! Sinning with Los Santos: Book 2 of the Badass Bikers series is on sale now! For author updates, follow Ms. Marina Black on Amazon, Facebook, and Twitter!