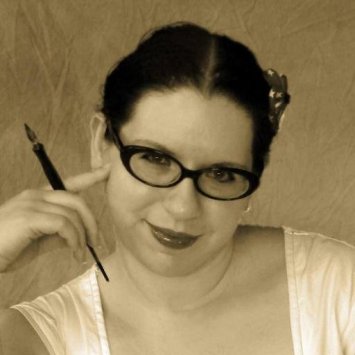 It gives me great pleasure to introduce to you debut novelist Jewel E. Leonard. Jewel and I struck up an immediate friendship when we crossed twitter paths on Ang D’Onofrio’s #2bitTues one liner theme party for WIPs. 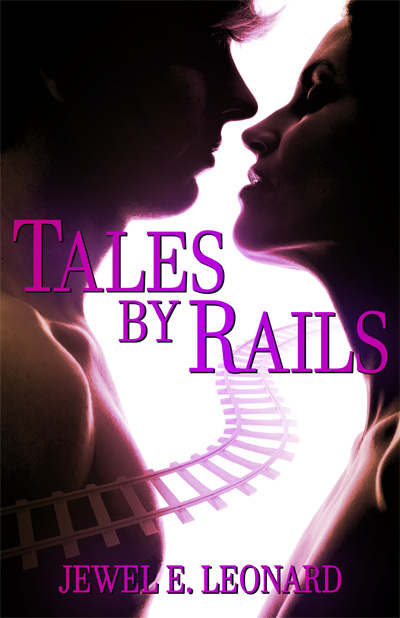 Fresh from a failed marriage, Rhea hops on a train going from Los Angeles to Chicago. It’s the perfect escape from her troubles with the added bonus of meeting a sexy stranger. What begins as innocent flirtation swiftly escalates to sexual encounters beyond her wildest dreams.

“I’m gonna go out on a limb here and guess that your ex wasn’t the complimentary type.”

Rhea’s hands traveled down to Surfer Boy’s shoulders where she transitioned into a deep tissue massage.  He groaned, bracing himself against the seat.  She otherwise failed to acknowledge his statement.  She preferred to leave Mark out of this.

Unlike last night, Rhea watched what she touched.  The way his t-shirt pulled and puckered over his skin.  Rhea clenched her jaw, making a conscious effort to keep her arousal at bay.  But—as they had both demonstrated previously—blood was apt to flow wherever it damn well pleased.  Her core throbbed despite her efforts to repress it; the best she could do was to focus on him with what little concentration she had to spare.

She alternated between deep tissue and Swedish massages, at times doing nothing more than running her hands over his muscles and lamenting that he hadn’t taken off his shirt first.

He repositioned himself so that he was sitting in the seat the way its designers intended.  Rhea leaned forward and rested her hands on his knees, her v-neck shirt gapping away from her chest.  When Surfer Boy inhaled, she saw how his eyes locked onto her exposed skin.  “That’s . . .  swell,” he breathed.

Her gaze dropped to his crotch: That was swell, too.  She smiled.  “So which muscle is giving you grief?”  Her hands slid up the length of both thighs, stopping so close to his crotch that she could feel the fabric of his shorts straining over his hard-on.

“That one.”  Surfer Boy nodded to his left leg.

She slowly assessed his muscle spasm with both hands, her smiling broadening.  “You are aware that I can totally tell you’re faking your cramp.”

“How else was I gonna get you to touch me there and still look cool about it?”

“You don’t need to play these games.”  Her thumb slid across his zipper.  He pushed back from beneath it.  “I’m alone in a confined space with you already.  You closed the door and the curtains and I didn’t protest either.”  Rhea raised her eyebrows pointedly.

Surfer Boy lifted her face by the chin, meeting her gaze.  “Kiss me.”

She leaned in, pressing her lips to his; she could swear there was a spark between them, but it was possible that it was just static electricity.  Albuquerque—or the air aboard the train, anyway—was dry.

He tilted his head, gliding a hand up the nape of her neck.  Rhea sighed.  She felt him smile against her lips.

“I liked that sound.  And I wanna hear you make it again.”

Oh just screw me already!  She chose a more diplomatic reply, instead: “As a general rule, I don’t touch my clients’ willies.”

“As a general rule?”

“So.”  Surfer Boy brushed back her hair, sliding his hand down her neck to her collarbone.  Further down he went until he cupped her left breast through her shirt and squeezed it with restraint.

She moaned, her head tipping back.  “Yes.”

“Oh that is a better sound.”  Surfer Boy kissed the side of her neck.  His kisses turned to sucking and she leaned into him with a deeper moan.  She shuddered and sighed.

Tell me about your new novel.

Tales by Rails is a 28,000 word novella, which makes it the shortest completed writing project I’ve ever done.  The novella follows Rhea’s escapades immediately following her divorce.  She’s without a home when she decides to take an unplanned vacation from her problems—so she hops on a train going from Los Angeles to Chicago (the Southwest Chief—a route I’ve traveled many times over).  She’s open to adventure as she has no plans for her future, which is good because the sexy stranger she meets on the train wouldn’t factor into them.  What starts as innocent flirtation swiftly escalates to adult encounters beyond her wildest imagination . . . and before the 43 hour train ride is over, Rhea finds herself facing a whole new set of problems.

I’m all for a good pas de deux, but the up against the wall encounters played out on television and in film seem to be at hyper saturation levels? Can you account for the popular preoccupation with vertical coital?

I could take a stab at it, I suppose.  My best explanation for the popularity of showing not a horizontal mambo but a vertical one is because the average person in the real world has neither the physique nor the stamina  . . .  nor the prowess . . .  nor the health insurance coverage . . .  to successfully do, if you will, such acrobatics.
I won’t name names but I personally know a great many women who fantasize about being pressed against a wall (to put it politely) but who can’t seem to manage the mechanics of such feats with their partners.  There’s also the lack of wall space in the average person’s home to contend with.
Lastly, I think it looks better to viewers to have lovers upright rather than on their backs, particularly women—in that case, gravity is their breast friend.  When laying down, things tend to flatten or ooze into armpits without a bra (and let’s face it, if they can get away with showing chest meat, they will).  If you’re going for realism, there’s nothing wrong with a little chesticle displacement.  But this is Hollywood we’re talking about, right. . .?

A fine, practical answer with a bit of humor.  I love it!

In all things sex, I think discussing this phenomenon is about as taboo as taboo things get.  Erotica writers like me have to be careful if we’re going to criticize James because our audience is sipping from the same chalice as hers.  We don’t want to support it either because there are folks who will think less of our work if we associate with hers positively.  Damned if you do, damned if you don’t.

I do, of course, make a passing reference to it in my novella because it seems these days you can’t have a talk about sex and not bring it up.  🙂  If you read my novella following this review, you’ll see where I injected a bit of my reality into Rhea’s existence when it comes to the topic of Fifty Shades.

For Playboy to cease photographing nude women is throwing in the towel.  The plethora of pornography on the Internet squeezed the life out of an empire and I am, frankly, stunned it took that company as long as it did to give up the ghost.  With the Internet, all kinks are easily accessible and in many places even free . . .  (I’m lookin’ at you, Tumblr!  Not a complaint at all, just an observation.)  Could they find a new niche?  I’m sure they could.  Would it be cost-effective?  In any way successful?  Couldn’t tell ya.

Sensual encounters with strangers are among the top fantasies for men and women. Do these always result in happy endings in your fiction?

So what’s wrong with being on Team Slytherin?

For the life of me, I can’t figure it out.  I’ve been placed in Slytherin by several Sorting Hats and I’m fairly certain it’s because I always say I want recognition.  When seeking recognition became a villainous trait, I don’t know.  But I will tell you this:
I have always thought snakes are beautiful.

Clarification: Jewel gave me her top ten list of getting to know the author points. Here it is:

I recently rewatched BEYOND THE VALLEY OF THE DOLLS (1970), the ‘go to’ dirty movie in my time. What was yours?

I’ve heard tales of a movie called Debbie Does Dallas but I’m pretty sure it’s just an urban legend. 😉
One of these days I think I need to watch it when my son’s at school.  For . . .  research purposes.  Yeah.

What will you do with your kitchen cocks when you run out of space?

I’m a long way from that point, sadly.  But should the time come, I have no doubt that the cocks will propagate into other rooms of the house.  There’s space on top of our bookshelves and I have a half-empty antique China Cabinet . . .

This might be a good time to open the doors to the henhouse! 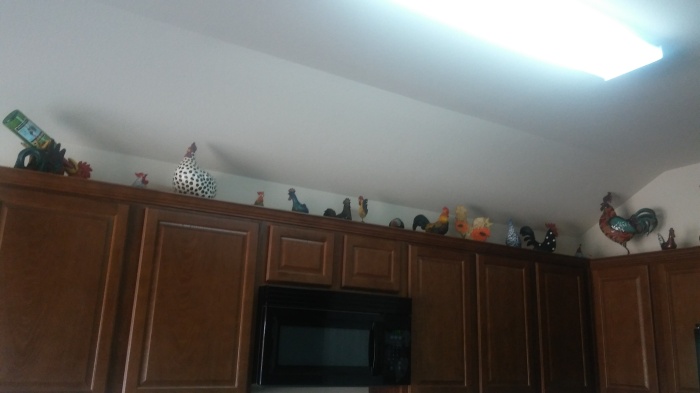 I agree that a well-groomed mustache can be comely, but if given the right circumstances would you ever give a full beard a try?

I’m not a huge fan of the full beard.  It takes impeccable grooming and just the right face to pull that off.  I like my honey with a neatly trimmed Goatee (actually, it’s a Van Dyke).
Before I get hate-mail for not being gung-ho about full beards, let me just say my father has a full beard (that is kept groomed but has been around longer than I have).  So . . .  yeah.  To quote Chandler from FRIENDS: “Can open . . .  Worms everywhere . . .”

My condolences on the loss of your kitty. Tell me how (he/she) inspired a vampire character in your next work? 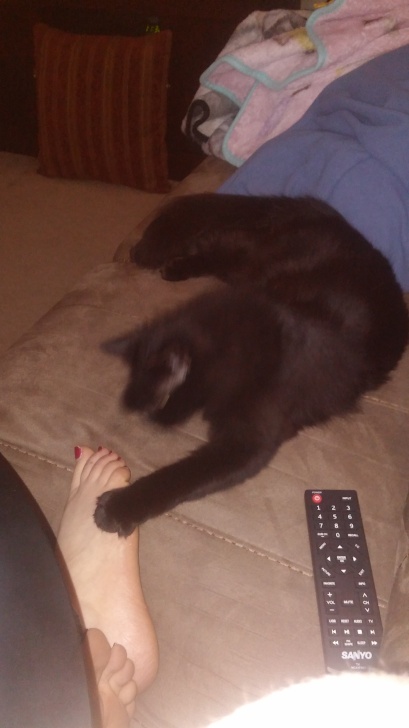 Thank you.  My first kitty (after a lifetime of pining for one) went to the Rainbow Bridge the day after Christmas in 2012.  She was my constant companion, kept me company while I was on bedrest with my son.  Never left my side through my ill-fated second pregnancy.  She was the best kitty a girl could ask for.  It was only natural to want to immortalize her.  A vampire (vampurr) seemed like just the way.

Her name was Miranda.  When it came to affection, she got overstimulated quickly and turned to love bites as a means of defense.  And every time she nibbled, she’d lick us afterward in apology.  When hubby and I were hashing out some of that future book, I said I wanted to have some vampires in my paranormal universe.  One careless comment led to another about this sexy but naive vamp who would bite her (lucky) victims and then lick their necks afterward and the next thing I knew, Miranda the kitty became Miranda the vampire.
I’m so excited to tell her story (but alas, it’s a few books down the road)!

What are you doing right now this minute?

I’m watching as my new cat, Pandora, wanders down the hall in search of mischief.  My 20 month-old daughter is working on getting to her feet at her toy piano.  My boys (hubby and son) are playing Minecraft on either side of me.  My phone is buzzing like crazy (my Starbucks app is out of date, I can’t stand for that!).  And I’m finishing this interview.  Thank you so much for the smiles and some really interesting, challenging questions!

Thanks for stopping by Jewel. Best of luck with your sizzling new book!