Night is falling faster and the leaves are turning. What better time to search behind what’s right in front of us? Author K.C. Sprayberry has no difficulty whatsoever doing this. For her, supernatural is second nature. Welcome K.C. and her latest… 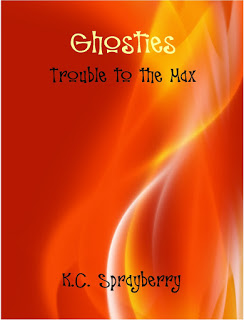 Ghosts are popping up all over Landry. The town is being overrun and no one knows why—least of all Hailey Hatmaker and her Ghosties crew. Only none of these ghosts are talking. They’re terrified of something that only Hailey and her team can figure out. Something which could prove disastrous for them all.

It felt so good to discover ghostly action in Landry once again. The Ghosties had just finished a dry spell like no other we had ever seen. We’d just gone through five months with nary a ghost to bother us. No goo oozing out of heating vents, or papers flying out of hands to plaster against the ceiling.

The call this morning had me, the fantastic, fabulous Hailey Hatmaker, gathering my group together lickety-split. We met up on the run, and raced all the way over to Bank of Landry. Once there, we had almost danced with glee at what greeted us. That was an hour ago. This particular ghost was proving far more difficult to exterminate than we had anticipated.

We could have got harsh long ago. I grinned. I sure don’t want this to end any time soon. I’m having fun again.

“You won’t stick around. No ghost has ever ignored me.”

I planted my pink and white beret more firmly on my head and darted forward. When I put on white jeans and a peppermint pink t-shirt this morning, I never expected an emergency call.

Nope, I wasn’t a cop, a firefighter, or even a paramedic. I had my thirteenth birthday just before Halloween and started dealing with ghosts nine years ago. Me and my fellow Ghosties had helped Landry, Georgia deal with weird hauntings, and this one proved we had a lot more ghostbusting to do in the future.

“Banks don’t give out free samples,” I yelled. “Tell me who you are, and what you want.”

That should have worked, except for one little thing. The wispy man behind the counter wearing a baggy black coat, vest, and pants with a white shirt ignored me. With a frantic expression and a bobble of his checkered bow tie as he swallowed, he tossed more money in the air. It was the worst thing to do when the Ghosties carried weapons that brought instant obedience from the other ghosts we had encountered.

I signaled the other Ghosties over. They gathered in a circle, two on each side of me.

“The manager said he worked here in 1912,” Annie Knott said. “He went bonkers after the Titanic sank.”

She tucked one side of her chin length, light red hair behind an ear after delivering the current info in a clipped voice. Her green eyes darted from side to side when the ghost cackled.

“Did he do this when it happened?” Freddie Conders asked.

“Of course,” she replied. “I’m pretty sure that he won’t quit because we asked nice. Lemon juice and salt?”

“No other way to handle it.” I pulled out a spritzer from a fanny pack. “Sly, Freddie, take the left. Annie, you’re in the middle. Tink and I will handle the right. Don’t miss.”

Sylvia ‘Sly’ Cherboom broke into giggles while Tinker ‘Tink’ Kacklin groaned. None of the others ever lost a chance to remind him about the day he doused one of our sworn enemies. He still claimed that it was an accident.

Like the rest of us wouldn’t have loved to cover Suzie in lemon juice and salt. Tink really needs to explain that better than he has.

Tink held up a salt sprayer, a baby bottle with the tip of the nipple sliced off. I stood beside him with a spritzer filled to the brim with lemon juice. Annie faced our target. She had a weapon in each hand since she was such a great shot. Sly and Freddie hauled out their containers and skidded to their position.

The ghost tossed a bundle of hundreds into the air. The Ghosties fired. Our target sizzled and howled before vanishing. 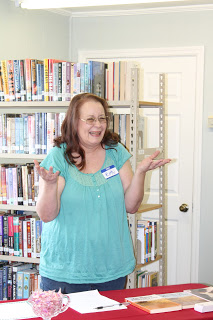 Born and raised in Southern California’s Los Angeles basin, K.C. Sprayberry spent years traveling the United States and Europe while in the Air Force before settling in Northwest Georgia. A new empty nester with her husband of more than twenty years, she spends her days figuring out new ways to torment her characters and coming up with innovative tales from the South and beyond.

She’s a multi-genre author who comes up with ideas from the strangest sources. Some of her short stories have appeared in anthologies, others in magazines. Three of her books (Softly Say Goodbye, Who Am I?, and Mama’s Advice) are Amazon bestsellers. Her other books are: Take Chances, Where U @, The Wrong One, Pony Dreams, Evil Eyes, Inits, Canoples Investigations Tackles Space Pirates, The Call Chronicles 1: The Griswold Gang, The Curse of Grungy Gulley, Paradox Lost: Their Path, Canoples Investigations Versus Spacers Rule and Starlight. Additionally, she has shorts available on Amazon: Grace, Secret From the Flames, Family Curse … Times Two, Right Wrong Nothing In Between, and The Ghost Catcher.