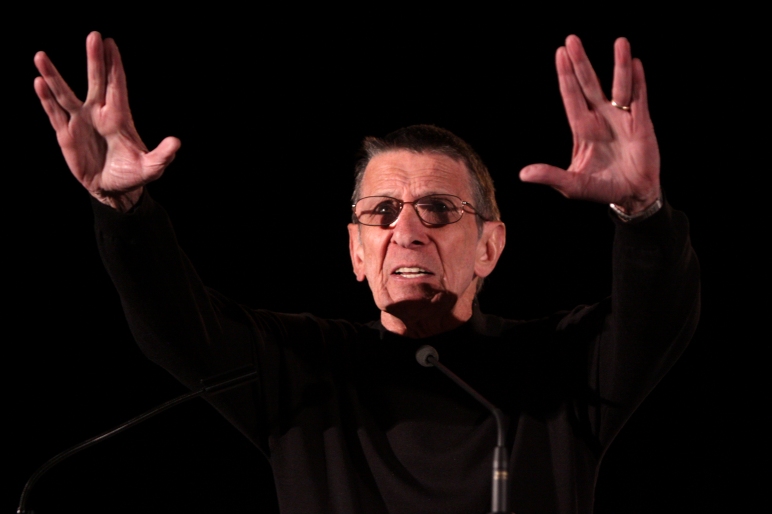 I woke this morning to the news that Leonard Nimoy passed away and immediately began a traipse back twenty eight years and thirty pounds. Back then—in 1987—I was completing a political science degree at the University of Toronto while pondering job opportunities at various receptionist desks across the city. Like any young person, I curried ideas that included changing the world by pioneering a great idea or assisting a key decision maker in the public policy realm. *insert laugh track*

But before I could do any of that, I had to answer a call for warm bodies at a down town hotel.

Unlike the rest of us from the hood, my friend Steve rose above we mere mortals by landing a really cool job as a casting director for *gasp* HOLLYWOOD MOVIES. With just a phone call, Steve could invalidate the Cold War and nuclear disarmament because he had the power to place whomever he wanted within arm’s length of the bold and beautiful.

Whether playing lawyer #3 to Sophia Loren’s crime fighting heroine in Courage, or a dance hall girl in a room that included Sam Neill and the late and talented Robert Urich in Amerika, that girl who used to be me became someone else completely. Sometimes I was a face in the crowd; at another time I was “woman at table” next to Canada’s own Wendy Crewson. For these experiences I claimed extensive bragging rights. But none of these, awesome as they were, came close to touching my brush with off planet greatness.

As a fan of the man from Vulcan, I knew that Leonard Nimoy did more than act and make public appearances. He also directed films and in 1987 that task brought him to Toronto to helm a little bit of froth called Three Men and A Baby.

It didn’t take long for me to ditch class when the call from Steve invariably came. That the film offered three male leads who on their own pulled a 10 out of 10 every time was enough to send any girl half way across town on a cumulonimbus cloud of her own making.

“Wear something upscale,” Steve advised, “and report to the main ballroom at the Sutton Place Hotel.

My reverie was short lived as I entered the ballroom.

“Here’s your line,” said the woman with the clipboard. “I need you to say it in three distinct ways.”

With ‘crazy,’ ‘heartbroken’ and ‘ironic’ as my only directives to go on, it did not yet sink in that this was something over and above an ordinary casting call.

What will I be this time? I wondered. Woman with cigarette? Lady at bar? I didn’t care. I was just glad to be there. And with thoughts of Ted Danson, Steve Guttenberg, and TOM SELLECK swirling through my grey matter, it didn’t take long for me to suspect.

“I’m gonna kill that sonofabitch,” was not only the line I was given to rehearse, but it reflected perfectly, my sentiment at that moment toward my dear friend Steve.

“Are you a model?” the gorgeous Toronto print model asked from her seat opposite me. She along with a clutch of other blondes like me occupied the one corner of the room that didn’t belong to the brunettes and redheads occupying the others.

“No,” I stammered, as I wiped my slopping forehead that refused to stop shining despite copious amounts of pressed powder. “I’m hoping for a career in politics.”

The stunning lass was impressed by my answer even more so after filling in the blanks I had walked into the room with. Steve hadn’t sent me to Sutton Place to help fill a room—he had sent me on an AUDITION to fill one of three “girlfriend” roles in the picture.

“I’ll take any one of them,” my friend giggled. “But I really hope I get Selleck.”

What followed were three rounds of “walk” “talk” and pirouettes before a sea of eyes that included the great man himself.

I said it so many times that I failed to notice the room thinning. For what was once a space of about 150 women was now reduced to a mere 10, and I was one of them.

Holy hell, I cursed inwardly. I might get this job.

I’d be lucky if I pulled a walk on, never mind a talky part.

My heart rose up into my throat.

“What color are your eyes?” he asked

He’s shorter and slighter than I imagined.

“Did you get it?” the Disney executive seated in the lobby of the Sutton Place asked.

It was over and I was glowing.

“No,” I said, undoubtedly flashing one of my signature toothy grins.

You bet I was.

You see, I was never for Kirk, just like I was never for John or Paul. I adored George Harrison. And I adored Mr. Spock too. On that day, twenty eight years ago, I was given an opportunity to meet someone I grew up in front of watching countless reruns of Star Trek. It was a moment in time I shall never forget.

And when I think about it, what better way to honor someone who had an impact on me than to remember him?