The page welcomes John DeBoer, our first guest in a spotlight series that will cover the site in tandem with the Blog Tour. Today, John offers up two selections from his authorial archive and boldly tries on the site’s Proustian questionnaire. Eureka! Thank you, John. 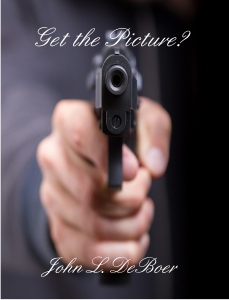 Jack Lansing, M.D. is a widower who’s now ready to get on with his life when a chance meeting with a beautiful young woman changes everything – but not in the way he hopes. After a one-night tryst with the enticing vixen, the unsuspecting surgeon finds himself the target of a powerful U.S. senator, organized crime, and a figure from his past he’d long forgotten – all because he succumbs to the charms of a woman he can’t resist, despite the predicament she has put him in. Beginning in Jack’s once-peaceful beach town, a deadly game of sex, money, and retribution plays out to a thrilling conclusion.

The Sincerest Form of Flattery

Former surgeon Jack Lansing, M.D. has become a bestselling mystery writer. At a book-signing event he meets an old colleague who, unbeknownst to Jack, has carried a grudge against him for thirty years. Then murders start popping up in and around Jack’s peaceful beach town – murders that mimic the plots in his books and make him a suspect. Jack must convince the police and the FBI of his innocence while trying to solve the mystery himself. Because, realizes, he and his wife could be the killer’s final victims. It is a chilling tale of twists and turns worthy of Jack’s imagination. But this time he doesn’t know how it will end.

Q: What are your thoughts on muses and do you have one?

A: I hesitate to invoke Greek mythology to explain what overcomes my “thinking blocks,” but perhaps there is a Muse-like feature we all carry in our brains. All I know is that when stuck thinking of an idea for my next book, or trying to figure out what my character will do next in the one I’m working on, I always manage, though it might take days or even weeks, to have that Eureka! moment. So far.

Q: Characters have a great capacity for love, yet they’re starved. Why do you think this happens in fiction and real life?

A: Love makes the world go around, as they say. Some have it, others don’t but want it. It’s the human condition. I’ve written novels in which the journey to attain love is part and parcel of the story, but in other novels of mine, an abiding love is already present and provides the foundation, the support, for the protagonist’s struggle with conflict. So I don’t think a character, or a real person, for that matter, needs to be always searching for it.

Q: Without giving specifics, would you say you’re a “happy ending” writer?

A: Yup. That’s me. My story conflicts all get resolved in favor of the good guys.

Q: What would you like to be remembered for?

A: Irrespective of career accomplishments, I’d like to be remembered as a good person.

Q: If you could dine with any historical figure, living or dead, who would it be and why?

A:  I’d like to have dinner with Yogi Berra. His unintentional wit has always amused me, and he seems like a genuinely funny guy. I think our senses of humor are compatible. And I love Italian food!

Q: Past, present, or future? Where does your mind dwell?

A: Well, I have a long past, the results of which, especially my family growing up and aging, I continue to see in the present. And this naturally leads to musings about what the future has in store for them. I suppose I dwell in the present – have to write and promote those books! – but I can’t escape thinking of what preceded the now and what lies ahead.

Q: What informs your writing most?

A: Reading . I’m a voracious reader of books in my genre, and seeing what works in them and what doesn’t makes me a better writer for it.

Q: Growing up in the Seventies, school kids were encouraged to think globally and act locally. Have you ever flirted with this philosophy?

A: I assume this question is meant to inquire whether global events affect what I do in my home town. Two of my novels – one published, the other being written – have international aspects, and attendant author points of view, but other than that, I don’t think I’m in the position to respond in a meaningful way to foreign situations. All I can do is use the power of persuasion to sway votes for those who do have the power to effect change in the world for the good.

Q: Guilty pleasures: we all have them. What is yours?

A: Junk food. Not the sugary, dessert-like goodies, but those other snacks that go very nicely with an adult beverage. I’ve never met a chip I didn’t like!

A: Getting my wife to marry me!

Q: Tell us about the one that got away. Person, place, or thing.

A: Linda Anderson. I was smitten with her in junior high school. Alas, it was unrequited puppy love, and I never got the chance to see if it would bloom, because my family moved away, and I never saw her again. Are you still out there, Linda?

Q: What are some of the overriding themes in your work? Do you have a favorite?

A: I try to have different themes in my novels, but the overriding driver in my stories is what is common to all thrillers – the triumph of the good guys against sinister forces.

Q: Who do you admire and why?

A:  Professionally speaking, I, of course, admire the stars of my genre – DeMille, Connelly, Iles, Crais, Child, etc. But I don’t know them as people; I’m not even on their Christmas card lists. The one person I admire the most, and forgive me for getting a little mushy here, is my wife. Not only has she put up with me all these years, her constant effort to do the right thing and her innate ability to put all those she meets at ease, not to mention her work ethic, are what I find most admirable.

Q: Are writers fully formed works of art or works in progress?

A: Ha! I can only speak for myself, but my experiences with other writers, and learning about the early struggles of those writers now at the top of their profession, leads me to the conclusion that we’re all works in progress!

After graduating from the University of Vermont College of Medicine, John L. DeBoer, M.D., F.A.C.S. completed a surgical residency in the U.S. Army and then spent three years in the Medical Corps as a general surgeon. Thirty years of private practice later, he retired to begin a new career as a writer.

When not creating new plot lines for his novels, Dr. DeBoer pursues his interests in cooking, films and film history,  politics, and the amazing cosmos.  Though he’s an avid tennis player, his yet-to-be-fulfilled goal is to achieve a level of mediocrity in the frustrating game of golf.

The father of two grown sons, he lives with his wife in North Carolina.